This is the second book in the novel-sequence series with the overall title of CANOPUS IN ARGOS: ARCHIVES. The first was Re: Colonised Planet 5, Shikista; the third  The Sirian Experiments; the fourth The Making of the Representative for Planet 8; and the fifth The Sentimental Agents in the Volyen Empire.

The Nobel Prize for Literature 2007 was awarded to Doris Lessing who was described, at the Award Ceremony, as “that epicist of the female experience, who with scepticism, fire and visionary power has subjected a divided civilisation to scrutiny.” Sadly she died on 17th November, 2013 at the age of 94. 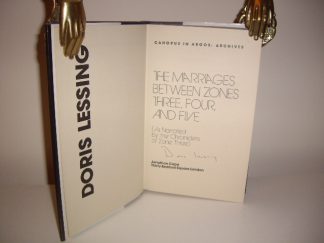 You're viewing: LESSING, Doris – The Marriages Between Zones Three, Four and Five SIGNED £180.00
Add to basket